A downloadable game for Windows and Linux

Space Wizard Power Tournament is a very work-in-progress implementation of a turn-based tactical role-playing game. It was built by a team of one for the first official Bevy game jam. Warning: it isn't very playable yes.

This project is my first ever game jam submission. It was also my first time using the Bevy game engine. One thing I learned was how much I love Entity-Component-System architecture. The way that it allows you to think directly about what the game state should be, instead of what methods to call on your classes, is really helpful. I started this project having no idea how to organize or prepare for a game jam, and also having no concept of how long it would take to get things working. That last I certainly learned the hard way. Though the game is not even close to done, I wanted to submit what I had in order to give myself a baseline for future game jams or Bevy projects. Next year, I'll make Fire Emblem look like Pacman!

The source code is hosted on Github and Source Hut. There are a few comments here and there.

The original intent of the game was to explore custom spell creation in an RPG. Those that I have played involve unlocking premade spells as you level up. Instead, I though it would be cool to allow players to create their own spells in the most flexible way possible: a programming langauge.

The idea was that spells would be short programs that would modify the game's state directly. Since Rust is a pretty high-level langauge, I decided it would be unapproachable to mess with the game's actual memory (and very unsafe!), so I settled on a system to serialize game objects into a virtual memory buffer. After a spell is cast, the game reads the buffer to see what has changed, and then propagates the change on to the real state. The virtual memory also let's me do cool things like create memory cells that hold a 10 digit number, instead of 8 bits, meaning that viewing and editing memory would be much easier for non-programmers.

Players could unlock new type signatures, which would be highlited in a memory browser to show which part of the memory correspond to which type. Then, they would developed new spells by trial and error in a training level. A few example spells could be included to show the ropes. To keep things fair, changing different type fields would require different amounts of mana. It might take less to change a tile's temperature than an enemy's position.

The main downfall of this idea what that I felt the game needed a basic level of complexity for it to be fun to write spells. If the only state is enemy position and enemy health, you would win by writing enemy.health = 0. Not much fun... Implementing a turn-selection UI, enemy behaivour, and types of map tiles took me way too long, so very little work on the spell system was actually done.

This project is built using the Bevy game engine. A few other Rust crates were used, see Cargo.toml for details.

The levels were created with the amazing LDtk Level Designer Toolkit.

The tile sets contained in assets/tiles/sample_tileset are downloaded from https://kenney.nl, and are licensed with CC0 1.0.

To run on Linux, you need a few libraries installed, including 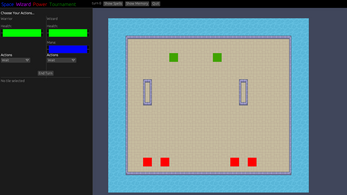 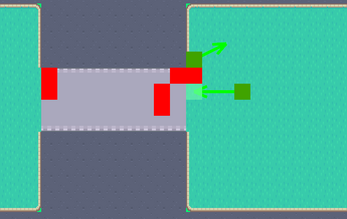